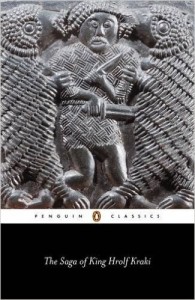 Composed in medieval Iceland, Hrolf’s Saga is one of the greatest of all mythic-legendary sagas, relating half-fantastical events that were said to have occurred in fifth-century Denmark. It tells of the exploits of King Hrolf and of his famous champions, including Bodvar Bjarki, the ‘bear-warrior’: a powerful figure whose might and bear-like nature are inspired by the same legendary heritage as Beowulf. Depicting a world of wizards, sorceresses and ‘berserker’ fighters – originally members of a cult of Odin – this is a compelling tale of ancient magic. A work of timeless power and beauty, it offers both a treasury of Icelandic prose and a masterful gathering of epic, cultic memory, traditional folk tale and myths from the Viking age and far earlier.