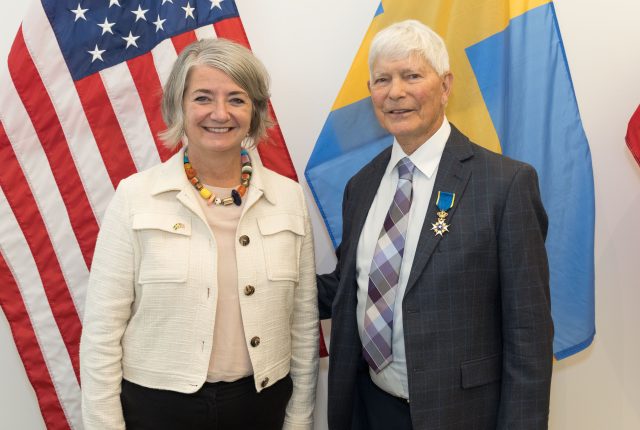 James Massengale, prolific author and distinguished research professor, has been awarded the title of Commander 1st Class of the Royal Order of the Polar Star by His Majesty King Carl XVI Gustaf of Sweden.

The Royal Order of the Polar Star was established in 1748 by Swedish King Frederick I as an order of chivalry honoring Swedish or foreign civic merits and devotion to duty through the scholarly arts. It is presented to recipients to recognize their dedication to the sciences, literature, and all civic merits that benefit the Swedish institution. Since its creation, there have been less than a hundred people awarded the title of Commander 1st Class of the Royal Order of the Polar Star by the Swedish monarchy. Being bestowed this title is a truly momentous feat for Swedish researchers.

Professor Massengale has made fundamental contributions to the study of Swedish poetry and music during his time at UCLA. He is the world’s leading expert on Carl Michael Bellman, a central figure in Swedish song tradition who still holds great influence over contemporary music in Sweden and internationally.

An award ceremony was held on October 6, 2022, at the UCLA Faculty Center to present the medal to Professor Massengale. The commencement was performed by the Ambassador of Sweden to the United States, Karin Olofsdotter, and was followed by a lunch reception in honor of Professor Massengale’s lifetime achievement.

In attendance were notable members of UCLA’s faculty and administrative offices including the Dean of Humanities David Schaberg, Distinguished Professor Kathleen Komar, Professor Ross Shideler, and Professor Arne Lunde. The group was joined by members of the Swedish Delegation to toast Massengale through the singing of traditional Scandinavian drinking melodies.

The Department of European Languages and Transcultural Studies wishes to recognize Professor Massengale for this incredible accomplishment. Professor Massengale has continued to publish and produce in and on Sweden even after his retirement. He is currently at work on a definitive, multi-volume annotated work of Olof von Dalin.