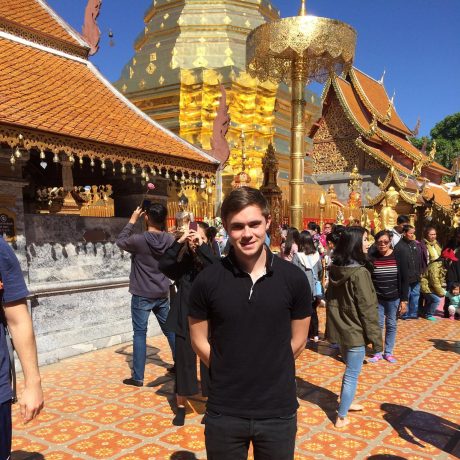 The French and Francophone Studies Department at UCLA transformed my life.  Prior to my freshman year at the university, I joined the department in their annual summer travel study program trip to Paris.  I had taken French language courses in high school, but never had the opportunity to participate in a cultural immersion program like that ever before.  The French department’s summer travel study program was amazing.  My classmates and I not only explored the city of Paris, but also had a chance to see the French countryside including a visit to stunning chateaus in the Loire Valley.  In addition, the program linked my UCLA classmates and I to French university students who showed us around and introduced us to their friends.  I frequently visit the same French students who I met that summer whenever I travel abroad now.  I was so blown away by my experience that summer that I changed my major to French after my freshman year at UCLA.

As a student in the French department, I participated in the department’s travel study program in Paris again for a second time, taking courses in French language, culture, and business.  My second summer was even better than the first, having the opportunity to visit different parts of France and improve my French speaking skills. When I returned to UCLA for my sophomore year, I became heavily involved in the French department’s language and culture club, Le Cercle Francophone, which hosted numerous academic, social, and professional events for its members, including field trips to COLCOA, the largest French film festival in the United States at the Director’s Guild of America in Hollywood.  I also had a chance to meet the Consul General of France in Los Angeles at UCLA and wound up pursuing a 10-month internship at the French Consulate.  My coursework in the department aligned perfectly well with my internship, and prepared me excellently for yet another study abroad program, this time at Sciences Po in Paris for an entire academic semester.

The French department at UCLA has given me unrivaled opportunities that cannot be found at any other university in the United States.  The department’s world-renowned scholars are not only esteemed professors, but also mentors for life.  I regularly keep in touch with my professors over the years.  With the assistance of the French department’s staff and faculty, my success as an undergraduate student culminated in acceptance to a top-tier graduate program in international relations and economics, which required proficiency in another language other than English.  I would not be where I am today without the French department at UCLA.  The intimacy and care of the department allows its students to pursue a range of opportunities, both on and off-campus that no other department at UCLA can offer.  I will never forget my experiences in the classroom, at Le Cercle Francophone events, and on study abroad trips that are my fondest memories during my time at UCLA.